In the children’s book Henry’s Awful Mistake, a duck named Henry invites a friend over for dinner and spends the day carefully preparing a delicious meal. During the preparations, he sees a tiny ant in the kitchen. This is unacceptable. He cannot let his evening be spoiled by the presence of an ant, so he goes to work to eradicate it. At first, he considers reasonable measures: ant spray, and then a pan to smash it. But the ant disappears before he can control it. The thought of it invisibly lurking in his home is too much to bear, so Henry goes to work, tearing apart walls, smashing water pipes, and hacking away at his invisible enemy until the entire house is in ruin. 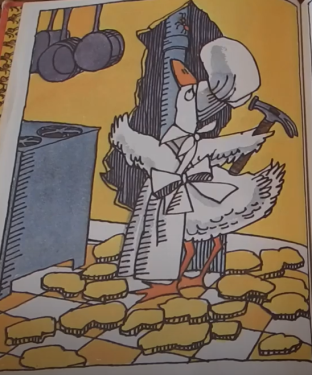 This children’s story perfectly captures some truths of human nature. We love certainty and control, and will go to great lengths to achieve it. Invisible threats are almost unbearable. Horror movies understand this. We can cope with any monster or demon once it is visible and known. What is unbearable is not being able to see the thing underneath the bed or behind the closet door.

The current pandemic has shattered the illusion of control. In our modern hubris, we came to believe that somehow we had finally conquered nature. With exacting science and expertise, the thinking went, we could carefully steer the machine of society to avoid just about any peril. If something goes wrong, then somebody messed up. There wasn’t enough of this. There was too much of that. Now that a virus has been let loose upon the world, it simply means that someone didn’t pull the right levers of the machine at the right time.

The situation shares similarities with the threat of terrorism. Terrorists, like viruses, thrive by eluding detection. They exploit trust and openness and seek dense gatherings of people in which to work their destruction. Invisibility and unpredictability is the very source of their terror. I grew up during the Cold War and remember the horrific warnings about what might happen in a nuclear war. But the Soviet Union was a known threat–a threat that could be countered in rational and measured ways. And the consequences of overreaction–of doing too much in response–were so terrible that officials took great pains to ensure cues were not misread and missiles not launched unnecessarily. In the aftermath of 9/11, we did not have the luxury of a visible enemy. For all we knew, there were hoards of sleeper cells just waiting for the command to wreak havoc upon American society. The appropriate response to this threat was targeted intelligence gathering and careful police work.

But at the time, that didn’t feel like enough. Invisible threats invite disproportionate responses. Like Henry, we tore the house apart (but this time someone else’s house), invading and occupying two sovereign nations at a cost of trillions of dollars and countless lives. At the end of the day, what was it that actually prevented future terrorist attacks in America? Not total war, but targeted intelligence gathering and careful police work.

Faced with the invisible threat of a pandemic, the instinct toward similar overreaction is understandable. At least at first, we didn’t know how this virus behaved and what threat it posed. Caution made a lot of sense. After better data and more research, there is still much we don’t know, but some things have come into focus. The early models overstated the threat. This is good news. The population that the virus targets the most is also coming into focus, allowing us to divert protective resources to the vulnerable rather than the whole of society. This is also good news. Flattening the curve was the goal, and we have achieved that goal, so much so that more hospitals are underwhelmed than overwhelmed. Social distancing in most places can be relaxed while watching for hot spots and outbreak clusters.

But for some, living with the threat is not good enough. Nothing less than full containment brought about by indefinite lockdowns will do. No degree of threat is tolerable. Floorboards and walls must be dismantled. If necessary, the house must be brought down if that’s what it takes to live in the comfortable illusion of certainty and safety. In questioning the soundness of this approach, one is accused of putting dollars before life, of being willing to throw society’s vulnerable under the bus out of a need to dine-in at restaurants or visit a salon (as if that is actually what is at stake).

I sympathize with the fear of living with uncertainty. It’s a distressing fact that we live in a world where the possibility of death lurks around many corners. Every time I let my teenagers take the car out with friends, I shudder at the thought that it might, just might, result in officers standing at my door, hat in hand. Horrifying as that possibility may be, the alternative–restricting their freedom and keeping them home all the time–is no way for them to live life. Freedom comes with inherent risks. I believe this is why a major tenet of most religions is the concept of faith, the courage to continue living in the face of uncertainty.

I do not know what measures are and are not appropriate to fight a pandemic. I’ll leave that to experts and scientists. But the degree with which we implement recommendations and codify them into emergency declarations is not a scientific question; it’s a philosophical and political one. And it is the domain of every citizen to engage with these questions and not merely bow their heads when someone waives the banner of expertise and authority.

I believe it’s possible to find a reasonable balance between inaction and overreaction. I also believe finding that balance requires vigorous debate, not unquestioning compliance. We must be careful to not let our desire for certainty and safety lead us into extreme and harmful policies. I believe it’s possible to watch for the ant, keep the dinner date, and still live in a decent house at the end of the day.

Sheldon Lawrence is a writing professor, essayist, and author of the recent novel Hearts of the Fathers , story of one soul’s redemptive journey into the afterlife. Please follow new posts on this blog by submitting your email at the upper right on this page.

4 thoughts on “Fear of the Invisible: Viruses, terrorists, and the Danger of Over-caution”